“We are proud, that our aim to decrease greenhouse gases into the atmosphere while increasing productivity of own production got support from EBRD and Taiwan CDF. This 7 yrs loan also shows the appreciation of us being long-term investor with sustainable focus into Ukrainian agriculture” – said Johan Damne, the chairman of the board of Grain Alliance AB

”This investment will allow us to produce and dry more grains with smaller footprint. Additional storage and new dryers with heat generators will allow us to dry additional 170 thsd tones of grains during the season. We can see that the investment will bring benefits to our regional clusters as well as to local communities.” – added Evgeniy Radovenyuk, CEO of Grain Alliance AB. 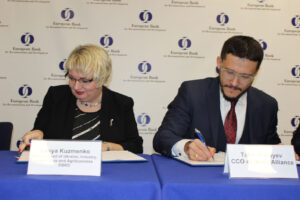 On November 13, the Ambassador Extraordinary and Plenipotentiary of Sweden to Ukraine Martin Hagström made a working visit to Poltava region for the first time. In particular, the ambassador visited the grain facilities of Grain Alliance (Baryshivska Grain Company) and met with the Chairman of the Board of Directors of the company, Mr. Johan Damne. The enterprise applies energy-saving programs on grain drying, which is introduced into to Ukraine. For instance, the company uses an Italian dryer by BONFANTI that works on alternative fuels such as grain processing waste and sunflower husk pellets.

– Baryshivska grain company has been operating for over 20 years in Ukraine. About 60 million dollars have been invested into the company development since the advent of the Swedish ownership. Today Baryshivska Grain Company is an agricultural producer with 100% of Swedish investments. The main policy and strategy of the enterprise is to process the European culture into the subject of organization of labor, both in the economy and in production, and in attitude to the land and to the human. Therefore, our strategy is intended for long-term cooperation with communities. Grain Alliance is a member of a group that has been steadily and confidently working in Sweden for 130 years. I think, such long-term cooperation will have a positive result in Ukraine as well, – says the executive director of Grain Alliance Yevgeniy Radovenyuk.

– Our activity has been based on the principles of social and ecological responsibility for a long period of time. We have been investors in Ukraine for 12 years , and we look forward to further fruitful cooperation,-confirms the above-said the chairman of the Board of Directors of Grain Alliance Johan Damne.

Also those present at the meeting were able to see and evaluate the cultivation of soil on a corn stub with the high-tech cultivator TopDown by Swedish company Väderstad. Grain Alliance has acquired 3 such cultivators and 2 Tempo seeders. New aggregates will be released in the field the following spring. Grain Alliance fruitfully cooperates with Väderstad in the matters of quality soil cultivation and sowing of grain.

Besides, the Ambassador and the chairman of the Board of Directors of Grain Alliance discussed the problems and prospects for doing business with Swedish investments in Ukraine.

– Today I saw the work of Grain Alliance. The embassy is working at expanding economic contacts between Sweden and Ukraine. The most important thing for new investors and businessmen is to see how companies with Swedish investments are working in Ukraine. I’m impressed: Grain Alliance is a large Swedish investment with modern technologies, environmental approaches to production, that are similar to those approaches in Sweden. The company investigated various aggregates at the opened tender and identified that the best are those of the Swedish company, which is also pleasing, -summed up Martin Hagström, the Ambassador of Sweden to Ukraine.

For the third year, Baryshivska Grain Company has been implementing the principles of organic farming. In South Poltava Region, there are fields where crops are grown without the use of chemical fertilizers or means of protection. Their total area is 1600 hectare. At present, the Organic Standard Company has certified most of the company organic crop rotation fields that meet the requirements of European standards for organic crop cultivation. In addition, the relevant certificates have been received for the company warehouses where the grain is stored.
– Baryshivska Grain Company has been growing organic spelt for three years. Organic soybeans were first sown this year. Spelt has already been harvested, we have 700 tons of crop. The productivity level of this grain is 32 centners per hectare. ”Zorya Ukrayiny” is the first spelt variety in Ukraine, which has been passed for official registration. The value of this wheat is that it has up to 17% protein, – says the head of South Poltava region Grygoriy Plys.
– Spelt is a kind of grain that needs to be hulled. This is a rather difficult process. Modern German equipment is used for this purpose. We are able to hull 7 tons of spelt per a day, – says Ivan Shulga, the Head of “Ovsyuky” warehouse.
Baryshivska Grain Company considers organic farming to be one of the most promising and intends to develop it. 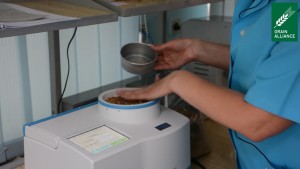 Conducting qualitative and rapid grain tests is one of the main conditions for determining its commercial value. Grain Alliance understands the need to keep laboratories up to date, providing them with advanced equipment. Achieving the aim, INFRAMATIC NIR 8800 GRAIN ANALYZER, manufactured by Swedish company Perten, was purchased for Berezan elevator in Kyiv region.

IM 8800 is the next generation portable NIR instrument for protein, moisture and oil

content determination in grains and oilseed. It really facilitates lab assistants work. And most importantly, the use of the analyzer accelerates grain acceptance, increases the speed of measuring the quality, reduces the risk of errors, – said the head of the laboratory Lyudmyla Romas.
The laboratory works long hours during the harvest. The analyzes are carried out in accordance with the current statutory norms and international standards.

Traditionally, harvesting for the company has begun in the South of Cherkasy region. So, the fleet of John Deere combines has been working in the fields since July the 10th near Mykhaylivka village in Drabiv district. They are hurrying up to gather wheat so that the grain will not fall off.
“By July the 10th 152 hectares of crops had been harvested. We harvest 100 hectares a day on average. This year wheat is of high second grade quality (food grade, 12,5%+ protein) of domestic breeding. The yields of wheat are good – around 55 centers per hectare. We still have to collect 1,300 hectares of winter wheat. If the weather conditions are favorable, we will be able to cope with the task within 10-11 days”, – says deputy regional agronomist of Cherkasy region Olexandr Zhyla. Trucks are transporting the harvested grain straight to the Pyryatyn elevator.